Yesterday it was announced that Boston Bruins defenseman Torey Krug will be out following an ankle injury he sustained during the pre-season game against the Philadelphia Flyers. Following the game, there was speculation as to whether or not Krug would be ready for the opener on Wednesday. Things didn’t look too good for the 27-year-old as he was seen leaving the arena in a camwalker boot. For Bruins fans, it’s sorta of a déjà vu as Krug also suffered an ankle fracture during the end of the playoff loss against the Tampa Bay Lightning. General Manager Don Sweeney also stated that Krug will be re-evaluated in three weeks.

🎥 Torey Krug on his ankle injury: "It’s frustrating, it’s unfortunate, very unlucky, and kind of a freak thing. But it’s part of it and you just gotta work through it and have the right attitude and continue to work." pic.twitter.com/RaJZuTcpDw

Not exactly the best way to start a season, but it’s certainly not the first time this Bruins team has faced injuries early on. Last year, Boston seemed to be hit by one injury after another. As the story goes, many analysts weren’t exactly positive about the team and chalked it up as a rebuilding phase. And if you followed closely last season, the Black and Gold (with all those first-year guys) made the Playoffs. Last year’s team was all about the explosion of youth and the chemistry that the team developed; something that will hopefully carry over to this year’s team. With Krug out for a few weeks and Matt Grzelcyk nursing a lower-body injury, the reality of Urho Vaakanainen making it on the varsity team is no longer a long shot.

“He’s got poise and patience, and he’s a great skater that covers a lot of ice. He’s got to continue to get stronger and understand the physicality that he’s going to face if and when he plays. Has he passed other players? Well, he’s performed better than some other players and those players have had injuries during that time period as well. So the jockeying begins as it does at every position. He’s made the most of the opportunity he’s been given, so good for him.”-GM Don Sweeney

🎥 Urho Vaakanainen: "I think I had a good training camp. Now I just have to wait what the coaches decide. I think I did my best, so I can be proud of it…I think I can play in the NHL." pic.twitter.com/sm6j0yJqfW 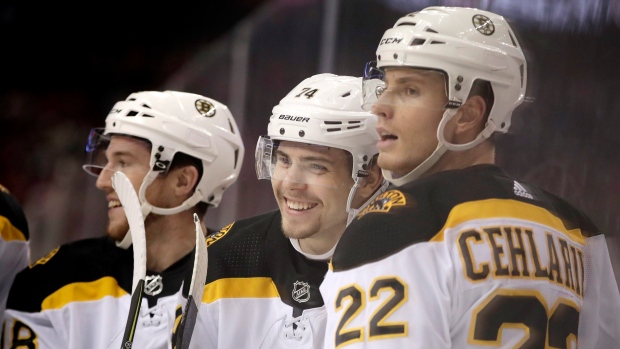 In other Bruins news, GM Don Sweeney also announced yesterday that both forward Peter Cehlarik and center Trent Frederic have been assigned to the Providence Bruins (AHL). Frederic has recently been in the “running” for that third center line spot. Cehlarik, for his part, has been making a push to crack a spot on the Bruins roster. During the preseason, Cehlarik played four games and netted one goal with four assists. As injuries creep up, (which will happen) we may see both Cehlarik and Frederic come up from P-Bruins and fill a slot.

And lastly, Patrice Bergeron looks to be ready for the season opener. The 33-year-old center has missed all preseason and China games to rehab from a groin surgery. Coach Bruce Cassidy offered some good news:

Cassidy also says Patrice Bergeron had not setbacks today and should be good to go on Wednesday in Washington.

🎥 Patrice Bergeron: "Feeling better every day…it was good to get another practice in and a pretty good skate, actually. Still shooting for Wednesday. There’s no changes." pic.twitter.com/i5LN9j2DMY

Can The Bruins Repeat The Scoring Output of Last Season?