Last night, the Boston Bruins snapped their losing streak ending their road trip with a 4-1 win against the Ottawa Senators. The B’s looked solid all around with amazing saves by defenseman Brandon Carlo, goals from the top lines and a sick dangle from Brad Marchand.  The star shined brightly for David Pastrnak who ended the night with four-points, posting two goals and two assists. The top forward line had a combined eight points in the game. Throw in a good old-fashioned fight, courtesy of Marchand, and you had yourself a hockey game. 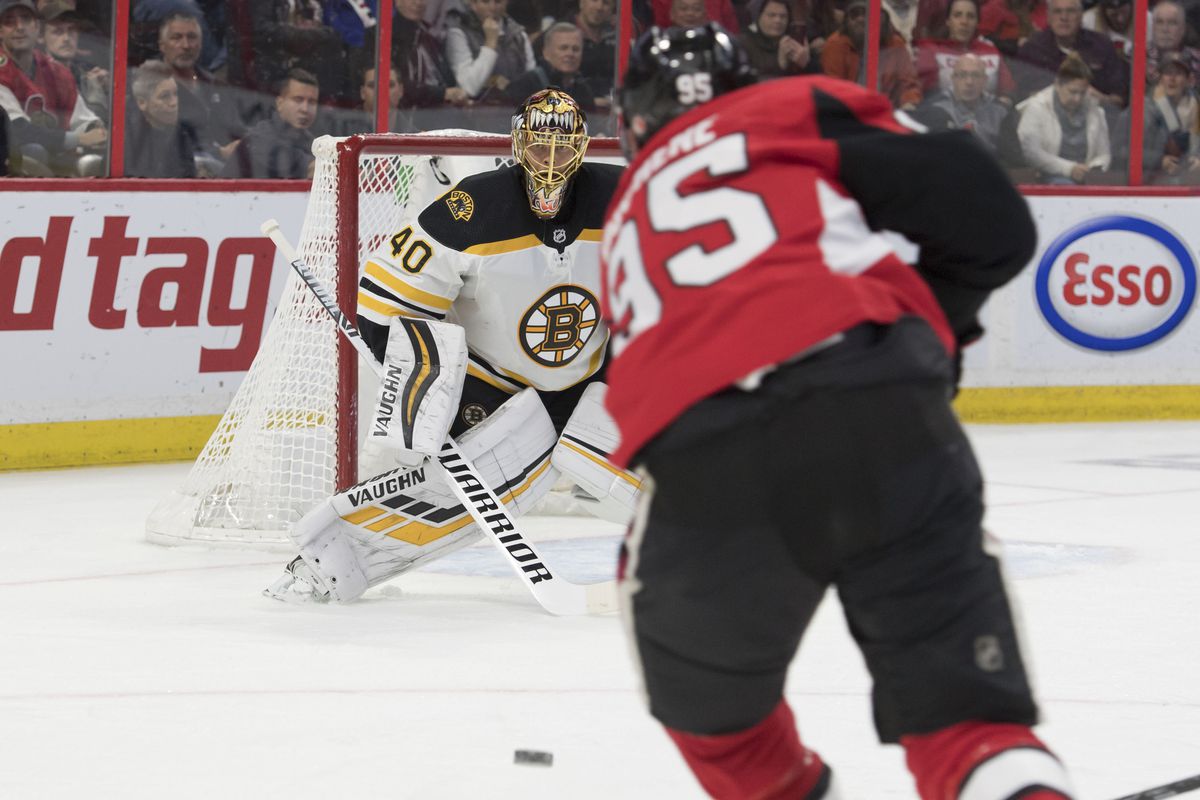 In the first period, Pastrnak had a wrister shot on goal, putting Boston on board at 11:17. Ottawa tied the game in the second when Thomas Chabot scored on a power play at 17:51. Boston would take the lead at 19:09 when David Krejci one-timed a Pastrnak feed on a 5 on 3 power play when Ottawa was called on a “too many men on the ice” penalty. Heading into the third, Patrice Bergeron scored on a tipped shot on a power play mere seconds into the period, making the score 3-1.

The Bruins would extend their lead after a filthy play by Marchand who deked Senators defenseman Dylan DeMelo and backhanded a pass to Pastrnak, who quickly sent the puck by goalie Craig Anderson.

David Pastrnak become the sixth player in Bruins history to have 10 goals in October, just shy of Phil Esposito’s record of 13 goals.  He is now tied with Auston Matthews for the most goals in the NHL with 10. Bruins played with great effort throughout the game. Defenseman Urho Vaakanainen sustained a concussion after an unnecessary elbow hit to the head by Senators Mark Borowiecki. According the NHL Department of  Player Safety, there will be a hearing. The Bruins will be looking to call up a defenseman from Providence.

Ottawa’s Mark Borowiecki will have a hearing today for elbowing Boston’s Urho Vaakanainen.

If the @RedSox need someone to lay down a bunt tonight, we know a guy who might be able to help… pic.twitter.com/rUG2wlcIFk

🎥 @pastrnak96 met with the media after his four-point night in Ottawa: "It was big. Even though we had two points on this trip, we haven’t won and obviously every loss feels tough…good that we came hard today and get a big win for us." pic.twitter.com/ulQTRqiz9A

Patrice Bergeron posted a goal and two assists while David Krecji had one goal and one assist in last night’s game. For Ottawa, Thomas Chabot scored the lone goal while goalie Craig Anderson made 28 saves. The loss would snap a three game winning streak for the Senators. Boston had 32 shots on goal while the Senators had 39 shots. Boston goalie Tuukka Rask made 38 saves. Zdeno Chara had a tough night with the officials; he had three penalty calls for cross checking, hooking and a trip. Brandon Carlo made two spectacular saves in net, keeping the Senators from scoring. Brad Marchand threw gloves down against the Senator’s Zack Smith with both men being sent to the penalty box.

The Bruins will be traveling back home and will host the Philadelphia Flyers on Thursday, October 25th with puck drop at 7:00pm

Changing of the Guards

Bruins or Lightning- Who Owns the Atlantic?