The Bruins fell to one of the Eastern Conferences top teams Monday night, The Columbus Blue Jackets.

The Bruins fell behind early in the game, giving up the first goal only two minutes into the game. They gave up another goal in the final few minutes of the first period, and another in the second period. Bruins Captain, Zdeno Chara, gave the team a much needed boost by stepping up and dropping the mitts with Blue Jackets forward Josh Anderson. As soon as Chara dropped the gloves, the Bruins completely changed their play. They played excellent in the second half of the second period, and excellent in the third. With this play, they stormed back with goals from Patrice Bergeron, Torey Krug, and Brad Marchand.  David Pastrnak added helpers on each of the goals.

Bruins Veteran goaltender Tuukka Rask has struggled so far this season–posting a .896 SV% and a 2.93 GAA through six games. Rask has only one win thus far, and it was nearly a month ago against the Nashville Predators. Rask had a rough start to the game in Columbus by giving up a goal on the first shot of the game, that he should’ve stopped. He gave up another that was tucked in beside him on the post, which he should have been covering. After the third goal Rask allowed, which was a breakaway, Tuukka played excellent in the second, third, and in overtime. In my opinion, Rask has never been the greatest in shootouts, so I’m not surprised with his performance.

“I don’t think we’re a team that’s going to win too many games if we don’t have all 20 guys going, and I don’t think that was the case pretty early on.”  -Head Coach Bruce Cassidy

”We didn’t show up, they were taking it to us, they were hitting us. We weren’t responding, Every second of that first period bothered me.”  -Assistant Captain Patrice Bergeron

”Z did an awesome job stepping up out there and our game started turning around there. Mills sticking up for Krug was awesome. We need that we need to show that we’re a team and a family in here. And we are, and that carries onto the ice and the guys did a great job standing up for one another.”  -Brad Marchand

“You never wanna see another guy get hit like that. Guys taking liberty out there so I kinda just reacted to be honest.”  -Kevin Miller

The Bruins will be in action again on Thursday night, back in Beantown, taking on the Vegas Golden Knights. Forward Kenny Agostino, and Goaltender Zane McIntyre, were sent back down to Providence on Thursday. It looks like some guys may be getting healthy, and looking to make a return soon. 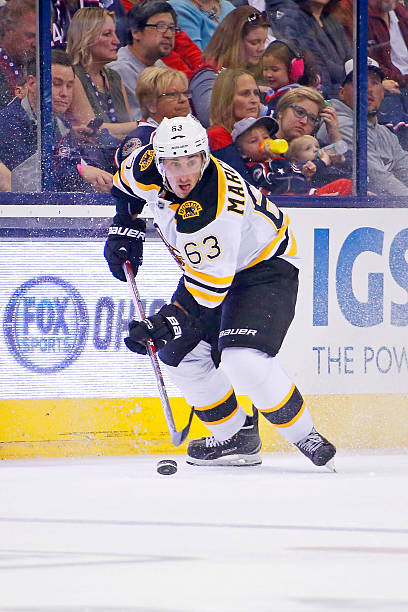 “A Rookie Season to Remember” By Jake DeBrusk

What Panarin Can Bring to Boston (@JamieGatlin1217)