The Bruins are off to an average start this season despite being decimated with injuries. They hold a record of 9-7-4 for a total of 20 points. They’ve been without Bergeron, Krejci, Spooner, Backes, Marchand, McQuaid, Krug, Bjork, and Tuukka Rask at some point this season. Bergeron, Krejci, and Rask have all returned to the lineup full time.

Reinforcements on the Way

With some key players still missing from the lineup it looks like the Bruins are going to get a boost to their lineup very soon. Ryan Spooner, David Backes, Torey Krug, and Brad Marchand all practiced Tuesday. Spooner was a full participant in the practice while Backes, Marchand, and Krug all wore non-contact jerseys. With Spooner being a full participant in practice, the Bruins could see Spooner back in the lineup as early as Wednesday against the New Jersey Devils. If Spooner isn’t ready to go Wednesday he will get another chance in Friday’s afternoon tilt with the Pittsburgh Penguins. Brad Marchand took some light contact during practice but it still appears he wont be ready to go tomorrow. Krug and Bjork are also both out for Wednesday’s game.

The Bruins also recalled defenseman Matt Grzelcyk from Providence on Tuesday. So it looks like he man suit up for the Bruins maybe instead of Postma or O’Gara.

I think when the Bruins get all these key players back they will be a force to be reckoned with. The lineup looks pretty deep down the middle and also pretty solid on the wing.

As you probably notice these probably wont be the exact forward line we will see when healthy. However I think this third line of DeBrusk, Spooner, and Bjork would be a killer third line and a very fast one as well. You also notice that I have Heinen on the second forward line. Heinen has put up 4 goals and 6 assists for a total of 10 points in 15 games. Heinen is on pace for 55 points this season and has proven that he deserves to be here. I think if he plays alongside some more skilled players like Krejci and Backes, he will score more and become a great player in the NHL.

With the goalie controversy heating up, I think the Bruins need to ride Khudobin until he loses. He hasn’t yet lost a game in regulation. He holds an impressive record of 5-0-2 with a GAA of 2.17 and a SV% of .935. With Rask really struggling so far this season I believe it’s time to let Khudobin play a few more games. By doing this maybe Rask will realize he’s got to be better and will start performing better.

The Bruins have a tough schedule ahead facing a red hot New Jersey Devils team, the defending cup champion Pittsburgh Penguins, Connor McDavid and the Oilers. The Bruins need to continue playing how they have been through all these injuries for the time being. 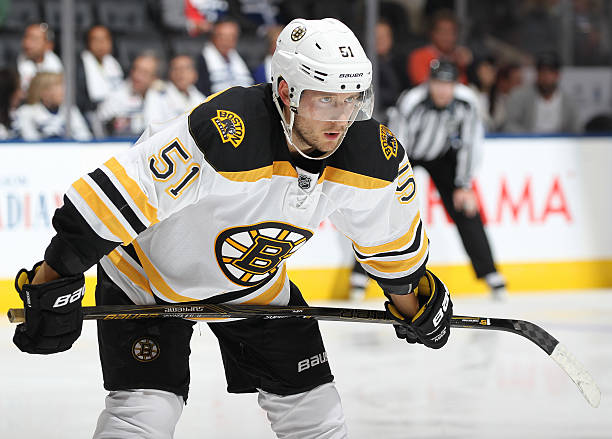 What to Expect from Ryan Donato in Year Two