Tonight is David Price‘s most important start in a Red Sox uniform to date. Yes, I’m aware he’s started Game 2 of the 2016 ALDS, which should hold that distinction in a vacuum. Tonight feels even more weighty, however. It’s a feeling that has been locked in the moment Ian Kinsler grounded into a game-ending double play Tuesday night.

The Red Sox have another chance to clinch their 4th AL East division title in six seasons (their third in a row), and they have the opportunity to do so for the second time in three years in the House That Jeter Built. Nothing would be sweeter than for Price, who is maligned nearly as much by Yankee fans as he is by his hometown supporters, to land the finishing blow.

Price has emerged as the most reliable Red Sox pitcher this year. He’s caught fire in the second half of 2018 after his first two seasons in Boston were both up-and-down (2016) and marred by injury (2017). However, any Price positivity will always be overshadowed by his performance when it counts in October and his reputation of being unable to come through in big games…especially against New York.

He did little to dispel those notions earlier this season. The Yankees knocked him out of the game in the first inning of his third start of 2018, scoring 4 runs on 3 hits before Price left the game with a “tingling sensation” in his left hand. As you can imagine, that didn’t go over so well in Boston.

He took the mound against the Yankees again on July 1st, this time in New York. The Yankees bounced him early yet again. Price allowed 8 runs and 5 HR in 3.1 innings. The 8 runs were a career high and ballooned his career ERA at the new Yankee Stadium to 4.75.

A Shot At Redemption 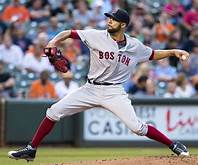 Included in that streak? A 6 inning, 2 earned run performance against the second place Yankees on August 5th in Boston. Price wasn’t necessarily extraordinary in that one. But, he didn’t implode, didn’t get Fortnite Fingers, and gave the Sox a chance to win.

You might expect more out of a guy making $30 million AAV against your biggest rival. However, given Price’s history against the Yankees, it was a step in the right direction.

Tonight, the Murfreesboro, TN native can:

Yeah, I’d say this is about as important as a start can get. That is until the postseason begins.

Use code “BSE” to get $20 off your first purchase when using Seat Geek!

David Price Likely to Miss Next Start in Atlanta

Rafael Devers And Why He Should Be An All-Star