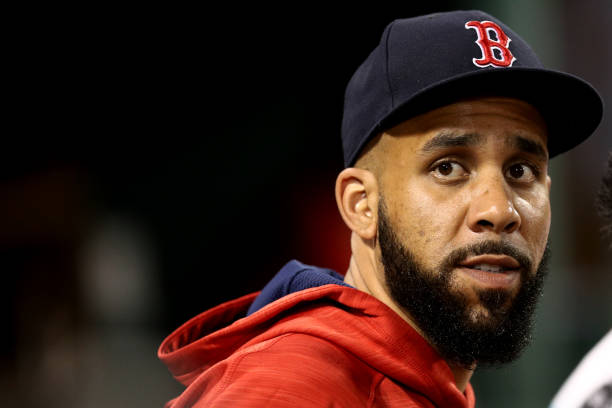 BOSTON, MA – AUGUST 1: David Price #24 of the Boston Red Sox looks on from the dugout during the sixth inning against the Cleveland Indians \at Fenway Park on August 1, 2017 in Boston, Massachusetts. (Photo by Maddie Meyer/Getty Images)

Just when Red Sox nation thought we could never have a clubhouse fiasco worse than chicken and beer, we now have Eck vs. Price. As silly as it sounds, this little feud between the beloved commentator and often irritated pitcher turned into a side show at the worst time of the season……  A PLAYOFF RACE!

For the fans around baseball not familiar with this ridiculous incident that could easily disrupted a club house during a playoff race and derail them from contention, here’s a little rundown of the circus that was Eck v. Price.

It all started when…

All of this stems from an incident where Price took issue with the fact that Eck criticized him for not hustling to cover the first base bag on a ground ball. According to multiple reports, the other incident that sent Price over the edge was hearing Eck say, “yuck” as Eduardo Rodriguez’ stats flashed across the screen during a game on the NESN broadcast. These incidents apparently rubbed Price the wrong way.  Price took it upon himself to call out Eck on a team flight with other members of the Sox cheering on the pitcher.

Here is a detailed look at the Price – Eckersley situation via The Boston Globe’s Dan Shaughnessy:

On the day of the episode, Price was standing near the middle of the team aircraft, surrounded by fellow players, waiting for Eckersley. When Eckersley approached, on his way to the back of the plane (Sox broadcasters traditionally sit in the rear of the aircraft), a grandstanding Price stood in front of Eckersley and shouted, “Here he is — the greatest pitcher who ever lived! This game is easy for him!”

When a stunned Eckersley tried to speak, Price shot back with, “Get the [expletive] out of here!”

Now, if this entire story is true,  which I believe it is because Shaughnessy doesn’t have a reason to make this up, then I am not only embarrassed for Eck but I am also embarrassed for guys like David Price, Dustin Pedroia, and John Farrell as well.

Man up and stand up

First, let me start off with Pedroia.  He is one of my favorite Sox players of all time and has been here long enough to realize that what Price did was no joke. Price landed a verbal slap on the face to a HALL OF FAME player who is beloved in Boston. Pedroia needs to step up in this situation and just tell Price to sit his a** down on the flight and stop causing a distraction for a team fighting for a playoff berth again (same can be said for “manager” John Farrell).

Secondly, in my opinion that Price is 100% wrong in this situation and had no right to belittle and embarrass a HOF player just because he did his job by voicing his opinion.  Eck’s job as a commentator for this team is to watch and call the games.   Sometimes that means criticizing the team if something is done incorrectly or just plain poorly. Eck, as the professional that he is did exactly that, but it just so happens his criticism was directed towards one of the SOFTER players in baseball who doesn’t think a broadcaster matters even if he is in Cooperstown.

Finally, John Farrell deserves criticism.  As a sports writer who covers our home teams (teams I have loved since a kid) the lack of respect and maturity on Farrell’s end baffles me. This guy is suppose to be an adult, the manager of men.   But on the team plane he seems to tolerate one of his guys acting like a child who had an outburst because he didn’t get his way. Farrell should have demonstrated some leadership by telling Price to sit down and shut his mouth. Farrell seems to be completely lost. It feels like this team wins in spite of him from his terrible in-game management skills and his questionable decisions off the field as well.

In closing I just want to take the time to show my support for Eck, who always makes the games enjoyable to watch with his funny quotes and one liners about, “hair,” “lettuce,” and “cheese,” with the list going on and on. Not only does Eck bring much needed humor to the broadcast booth but he also brings knowledge having pitched in big games as a pitcher for the Red Sox in his storied HOF career. This man has more accomplishments on his resume right now than David Price could dream of.   So if a little criticism hurts this guys feelings rather than pushing him to be a better ball player then he can take his money, and his ball and go right on home….wherever that may be!

J.D. Martinez Introduced as Member of the Red Sox

The Bullpen is Going to be Just Fine