For the Love of the Game…

Your buddies are over your house.

Pacing the room with excitement for kickoff.

Running to the fridge to grab another round of beers.

High-fiving when the Patriots score.

Maybe toss the pigskin around the yard at halftime?

Matt will never be able to do any of these game day routines.

Matt is 8 years old and holds a diagnosis of Spinal Muscular Atrophy (SMA).  SMA is a disease that robs people of physical strength by affecting the motor nerve cells in the spinal cord, taking away the ability to walk, eat, or breathe. It is the number one genetic cause of death for infants.

SMA sucks, but what this disease has not robbed Matt of is his love, passion and flat-out acumen for all-things-sports.

This is not about SMA.  This is about a kid who smiles through all his challenges and many of those smiles appear on his handsome face when he is watching sports.  Sports, in particular, the New England Patriots, allows Matt that same feeling of excitement we all get when enjoying our favorite teams play the games.  Watching sports puts Matt on a level playing field with the rest of us.  And while Matt can not run around and play catch or high-five his older brother, he gets that same pit of joy in his belly when kickoff/first pitch/tip-off happens.

This boy is an animal for it all….and a student.

Matt on the Pat’s Season

Matt absorbs sports knowledge like a sponge.  He can literally rattle off every play in order when watching Superbowl 51…because he has literally watched it 51 times (at least).  Being with Matt during a game makes it better.  He doesn’t miss a play, a pitch or a jump shot.

Here is another clip right before kickoff Thursday night…

He rattled off every NCAA March Madness seed to me last spring.  How about doing your math homework instead, chief?

I caught Matt watching a 2012 NBA finals game on-demand.  Were the Celtics even in that one, weirdo?

I almost told his parents to have him committed for a psychiatric evaluation!

Matt makes you truly appreciate those high-fives and games of catch that he can’t participate in.  In perhaps its’ purest form, Matt demonstrates why we love sports and that his passion can not be taken away from him by any ailment or perceived “disability”.

Matt is the man.  (Did I mention he is my nephew?)

And lastly, if you are ever in a bar debating what was the greatest touchdown in football history, I’ll settle the bet for you, ’cause Matt scored it in the storied Westford Pop Warner E season opener of 2015. 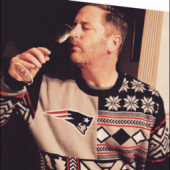 Frank McCabe is an avid relaxer and Chinese food (i.e. Mai Tai) connoisseur. When he is not tending to his ‘real’ job, his wife and three children, Frank escapes reality by writing and inventing anything “funny” that pops in his head. A former Ski Mask supermodel, Frank subscribes to the theory that life is short…and, well, that kinda sucks, doesn’t it? In his downtime Frank enjoys skinny skiing and going to bullfights on acid. Some of Frank's writings include: Book: Can I Be Frank?: An Auto-Blog-graphy, published December 2012 Screenplay: St. Patrick’s Day, 2013 WGA Registration Number: 1239438 Contributing Writer / Blogger, Can I Be Frank & Crew July 2014 – Present Contributing Writer/Blogger, Sons of Franky Cabot June 2013 – May 2014 Contributing Writer/Blogger, Boston Sports Extra August 2017 -

The Celtics With the Most to Prove this Season

When You’re Trying to Get Discovered By the Celtics, But Studies Are Getting In the Way

Who’s Stepping Up On The Celtics?