Bringing Nate Solder back should be the Patriots top priority

If the Patriots accomplish nothing else this offseason, they must accomplish this. Nate Solder is one of the top ten or fifteen best left tackles in the league, and his presence is crucial on this team. Quarterback Tom Brady isn’t getting any younger (probably), so keeping Brady upright should be the teams number one priority.

It won’t be cheap to acquire Solder, but the Patriots can’t afford to be stingy. Solder is easily the best left tackle on the market, and the NFL Draft is expected to be poor on starting-caliber tackles. This gives Solder all the leverage to break the bank, as teams won’t hesitate to pay for the most important position on the offensive line.

Not only is Solder one of the best left tackles around, but the drop off behind him in talent is staggering. Were Solder to leave, the next man up would be 2017 third round pick Tony Garcia. Garcia missed his entire rookie season with a blood clot issue, so it’s anyone guess how good he will be in 2018.

New England should also look into bringing back Cameron Fleming and LaAdrian Waddle. While neither is a starting caliber player, both are more than capable of filling in during an injury and playing adequate football. With right tackle Marcus Cannon’s injury history and the violent nature of the offensive line position, the swing tackle position is highly important.

Address the Running Back Position

The Patriots have quite a few players hitting free agency that New England would love to have back. Running backs Dion Lewis and Rex Burkhead were both valuable contributors to the 2017 Patriots, and would certainly be welcome back on the team.

However, the Patriots shouldn’t overspend on either player. Lewis is reportedly fielding three-year, $18 million dollar offers. If that report is true, Lewis would rank among the top ten highest paid backs in football. Lewis is a phenomenal talent, but his injury history makes him not worth that type of money.

Burkhead’s market is more unclear. While he is reportedly receiving interest around the league, there’s no way he’s receiving a contract similar to Lewis. It’s more likely that his offers are more in line with his actual worth, since he’s not coming off the career year Lewis is. Of the two running backs, Burkhead is the one more likely to return.

The biggest running back bargain could be Dallas Cowboys running back Alfred Morris. He probably wouldn’t cost much to acquire, and has a history of success. Prior to joining the Cowboys, Morris was the lead running back for the Washington Redskins. He broke the 1,000-yard mark in three of his four years there. He didn’t do it in Dallas, but that was because he was backing up one of the best running backs in football in Ezekiel Elliott. 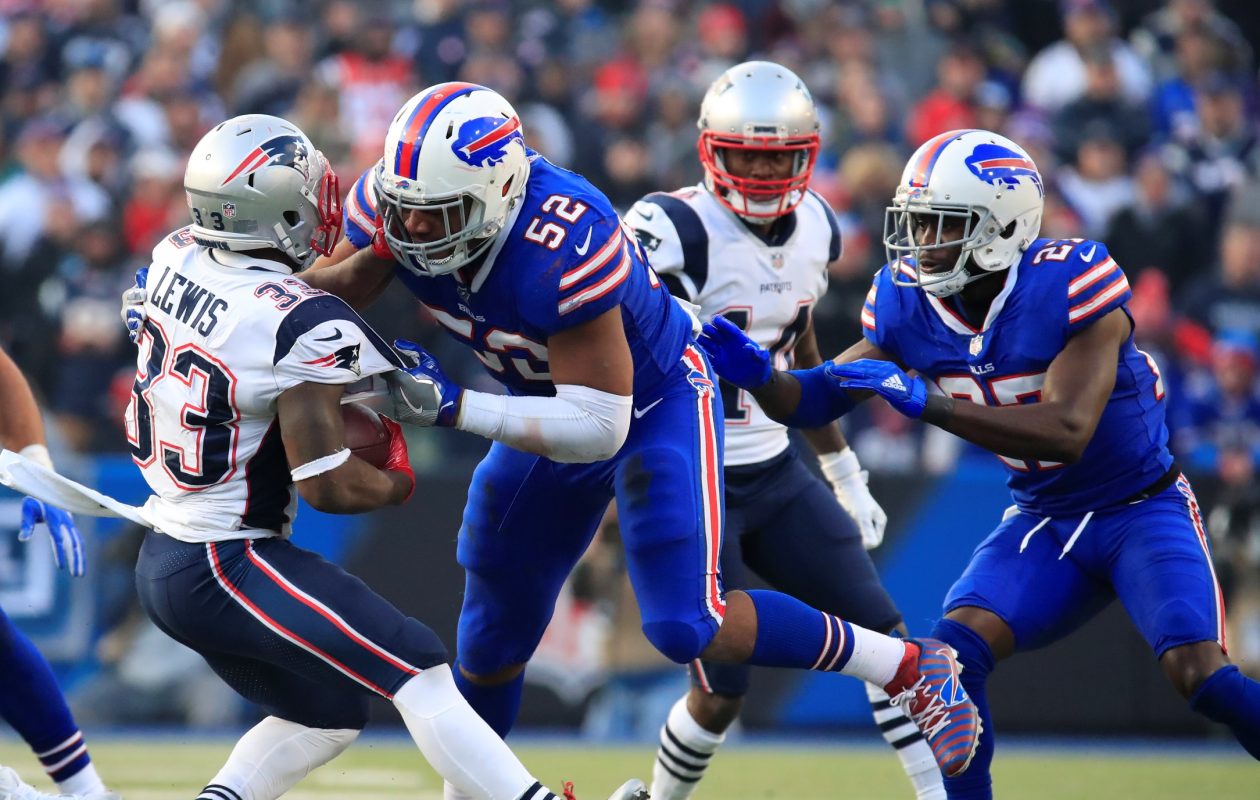 As currently constructed, the Patriots are paper-thin at linebacker. They have a legit star in Dont’a Hightower, a good number two linebacker in Kyle Van Noy, and not much else. Linebacker was an issue all season for the Patriots, especially when Van Noy couldn’t play.

There’s two steps to fix this. First, the Patriots should re-sign Marquis Flowers. Flowers had something of a breakout season in his first year in New England. Injuries forced the career special teamer into the starting defense, and he ended up making a name for himself. He’s a great pass rusher and can hold his own in coverage, albeit that isn’t his strength. He doesn’t have the same ceiling, but he has a skill set very similar to that of Jamie Collins. He should only get better as he gets more reps, so bringing Flowers back should be of utmost importance.

Flowers alone won’t fix this. New England should also look into bringing over a run stopping linebacker, and the best fit would be Buffalo Bills free agent Preston Brown. Brown led the league in tackles during the 2017 season, and would be a perfect fit in New England.

Brown’s not great in open space, so he would fill in as the middle linebacker. This frees up Hightower and Van Noy to play on the edge, which suits their skills better. This defense would be hard to run against with Van Noy and Hightower handling edge duties and the reigning tackles leader in the middle of the defense. Add in Flowers as an off the bench pass rusher, and now the Patriots have four linebackers capable of making big plays.

Let’s face it- Malcolm Butler is as good as gone. It was a great tenure that ended on an incredibly low note, but New England needs to move on. Looking around the free agent market, there’s quite a few players that could immediately help.

The Patriots already have one high-priced cornerback in Stephon Gilmore, but there’s talk they could go that route again. If they do, they should look at Los Angeles Rams cornerback Trumaine Johnson. Johnson played the previous two seasons under the franchise tag, and is a match for what New England’s scheme.

Johnson is better playing press coverage, but is certainly capable of dropping into zone and performing well. In many ways, he’s a mirror of Gilmore, albeit not quite as good. Combining those two with Devin McCourty, Patrick Chung, and Duron Harmon would give the Patriots one of the best secondaries in the league.

There’s also been talk that the Denver Broncos could release former Patriot Aqib Talib. While New England shouldn’t trade for him, they should definitely take a look if Denver does release him. Talib was the biggest factor in solidifying the defense in 2012 and 2013, and was an incredibly valuable member of the team. He’s not quite what he was, but he’s still one of the better corners around. He and Gilmore would arguably be the best cornerback tandem in football.

If New England wants a more cost-effective option, the best choice could be Kyle Fuller. Fuller will have a market, but not as big a one as the previous two. Fuller can play a variety of coverages and should fit in New England’s defense. He’s not a superstar like Talib or Johnson, but he doesn’t need to be. The rest of this secondary is so good that all New England needs is an average second corner to succeed.

NFL Nails Gronk with a One Game Suspension

Robert Kraft Knows the End Is near for Tom Brady