‘Twas quite the holiday weekend in the NFL. The Chiefs and Rams behaved well enough to find a playoff berth under their tree this year. However, others must have been not-so-well behaved. The Raiders, Dolphins, Lions and Cowboys found nothing but a way ticket to their couch during playoff time. In other news, Jimmy G and the Niners keep rolling, and the Browns did that thing they do once again. Below are Week 16’s biggest winners and losers.

The Chiefs earn a well deserved spot under the winners column this week. The reason is not for pulling off an impressive win over a tough opponent. The reason is because many counted them out after falling to 6-6 following a hot 5-0 start. A very underwhelming seven game stretch for Kansas City had their playoff hopes looking slim. However, thanks the regression of other AFC West teams, they remained in the race. It appears the Chiefs have learned from their rough stretch and are back to their normal selves again.

Their dominant Week 16 win over Miami extended their win streak to three games and brought their record to 9-6. During the streak they scored at least 26 points and have not allowed more than 15, outscoring opponents 85-41. The fact that the Chiefs have rebounded so strong after dropping six of seven games says a lot about the toughness of this team.

Tough opponent + road game + win = spot earned under the winners column. Further, it was a game that had serious playoff implications on the line. Both teams entered the contest at 8-6 and needed a win to remain in the playoff race. This Sunday it was the Seahawks who prevailed. I can not give enough credit to this team. I did not expect them to pull off this win on the road, especially with Ezekiel Elliott coming back from suspension. However, the pesky Seahawks will simply not give in. They have reigned in the NFC for about half a decade now and have preserved their playoff hopes with this big win. Another impressive aspect of this team’s season is that they are doing it without two of their defensive superstars, Kam Chancellor and Richard Sherman. I don’t know what others think but I would not want my team facing this experienced group in the playoffs. 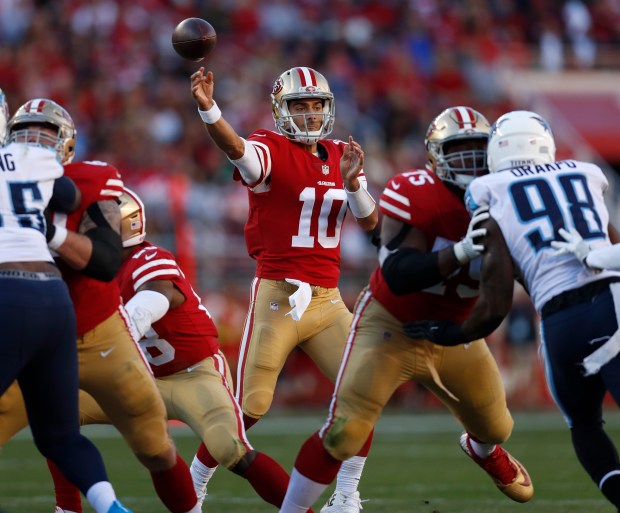 What difference one player can make; just ask Green Bay. Unlike the Packers, the Niners are benefiting from a one-player-difference scenario. San Fran was just 1-10 without Jimmy G and are 4-0 with him. This team became a lot more impressive with their most recent win. The Jaguars came into town at 10-4, riding the league’s premier defense and an improved Blake Bortles. Well, Garopollo and company put up 44 points on a defense that has allowed just over 15 points a game on the season. Thinking back, if Jimmy was quarterbacking the Niners all season they would certainly be at least in the playoff race. From Weeks two through six, SF lost five straight games by a total of just 13 points. It is reasonable to say that if they had Jimmy at that point in time then he could have been the difference and won those games. I know this is a stretch, but had they won those games their record would be 10-5, pretty interesting and says something about their potential for next year. To all other members of the NFC, keep an eye on this team.

Tennessee pretended that they were going to win this game just like they pretended to be a good team all year. I had high hopes for this team entering the year. I thought Mariota would continue to improve and possibly emerge into a top 12 quarterback, instead, he regressed. Tennessee’s third year QB has just 12 TD passes and 15 interceptions on the season, less than impressive. Also, the defense is currently ranked 20th in the league in points allowed per game at 23.1. Not necessarily terrible but with the offensive troubles, not gonna cut it.

Tennessee mostly beat up on the worst teams in the league this year in order to maintain a winning record. five of their wins have come against awful teams such as the Texans, Browns, Bengals and Colts twice. Now, with two straight losses, their playoff hopes are in serious jeopardy and Jacksonville rolls into town. They must win to advance to the playoffs.

Last week I said, “Wouldn’t that be the most Lions-y thing to do?”, referring to them potentially losing to the Bengals this week thus being eliminated from playoff contention. Well, they did in fact do the Lions-y thing, which was lose a big game to an inferior opponent. This has to hurt Detroit fans. Stafford and company fought so hard all season long. For much of the season they played playoff caliber football. Unfortunately, once again, they folded when everything was on the line. Road games are rarely easy, but they really should have had this one. The Bengals entered the day with a record of 5-9, and were playing terrible football pretty much all year. They also were playing for nothing but pride as they had already been eliminated from playoff contention. Well, rather than take advantage of their opportunity, they decided to stick to their roots and collapse. Overall, a pretty solid year for the Lions but this one bad loss did them in, onto next year.

Shoulda woulda coulda for Dallas, disappointing season. It started out rough, at 2-3 through their first five games. Then getting hot and winning three straight to improve to 5-3. Then Ezekiel Elliott was suspended and they went just 3-3 without him. So here they were, at 8-6, fighting for their playoff lives. Luckily, Ezekiel Elliott returned but he was not enough as they only managed 12 points in the loss that removed them from the playoff race. They finish at Philadelphia and it appears that this group may surprisingly be just a 8-8 team. Alike their Thanksgiving mates, its on to next year.

*Questions or Comments? find me on twitter @MLBfromNH (Kevin Civiello)*

An Unlikely Best of the AFC West Emerging?