The Curious Case of Colin Kaepernick

“I am not going to stand up to show pride in a flag for a country that oppresses black people and people of color. To me, this is bigger than football, and it would be selfish on my part to look the other way.” –  Former 49ers quarterback Colin Kaepernick, on his decision to sit during the national anthem in 2016 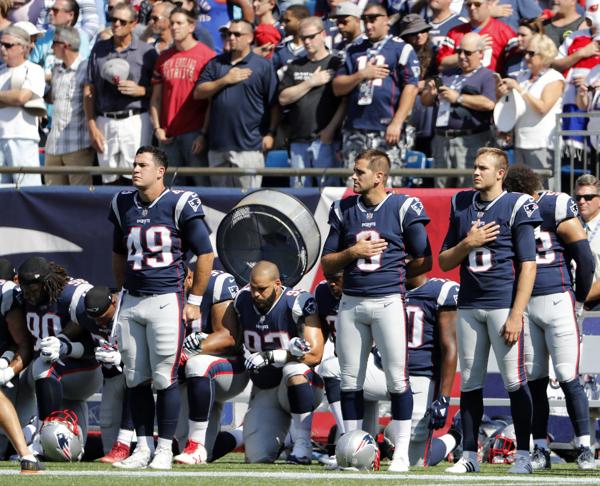 In today’s society, breathing the wrong way could get you arrested. Or shot. Or even killed. It’s crazy, right? Back in 2016, Colin Kaepernick blew the house down. By refusing to stand for the National Anthem and waving of the flag, he set the sports world on fire. Because to him, as an African-American athlete, the flag had recently represent what was wrong with the country.

All around the United States, minority shootings have increased ten-fold. Today, there are statistically more news stories now surrounding the mistreatment of minorities, mainly shootings. This is from a place where we’re all chasing the American Dream. Is that truly the case, though? Was is dreamt that racism and over-use of police force would take the place of peace and equality? Probably not. Athletes, celebrities, and politicians have all come to the support of Kap. In fact, they range from different demographics and skin tone. The issue that was the basis of his stance, is truly much bigger than a game of pigskin and a flag. It’s about the treatment and lack of support given to those who are “minority”, or anybody for that matter. How that’s been difficult to miss is hard to understand.

The only thing Kap did wrong… was nothing. He wasn’t belligerent, he wasn’t even aggressive towards his stance. He was able to professionally explain and stand by what he believed in. Isn’t THAT the American dream? Hardly, I guess. It’s troubling that in a time where we live with such heightened sensitivity, that there are still those out there who base their opinion on Colin Kaepernick SOLELY on their perception that he “disrespected the flag”, missing the more prominent issue. He shined a glaring light on something that so, so wrong with this country.

Not only all of that, but he’s been the face and the example for other athletes and celebrities who have done, and are doing the same thing today. Upsetting high-profile figures so much, that they leave football stadiums (VP Pence). Consequently, it opened up platforms for other like-minded individuals to share their thoughts and opinions. It’s an easy out for the close-minded to make an argument to blame the person who started it, rather than take responsibility for being part of the problem.

Leave the guy alone, who cares if he never plays football again. He’s done so much more. Kaepernick has made so much of a wave that he’s created a world-wide debate. Wrong, right, doesn’t matter. Colin Kaepernick has made himself into a pioneer. No golden enshrinement in Canton will ever highlight what he’s done.

Land of the free, home of the brave, eh?

Ten Fun Super Bowl Facts to Get You Fired Up